Fraternization, dating, and sex in your unit: How close is too close?

But relationships that are “too close”—including any that are prioritized over the mission—can hurt morale and overall performance. Any relationship that risks readiness or safety can be a problem. While “too close” relationships can occur anywhere, you might be at even greater risk if you're deployed, especially if you’re living in close quarters or isolated areas.

So how close is too close? The answer might depend on your branch’s policy. Take a look at some different scenarios that help explore the issue.

As it’s described in the Uniformed Code of Military Justice (UCMJ) under Article 134 of the Manual for Courts-Martial (MCM), “fraternization” is a relationship that compromises the chain of command, results in favoritism, reduces impartiality, or undermines order and morale. Typically, it applies to unprofessional or romantic relationships between officers and enlisted personnel, but it can extend beyond rank too. Fraternization can apply to close friendships, business relationships, or even certain financial exchanges between Service Members of different ranks, regardless of gender.

Since the context of the relationship is so important, it can be hard to know sometimes if fraternization is occurring. Remember, fraternization isn’t only about whether there’s a personal relationship between 2 people or between an officer and someone who’s enlisted. It’s ultimately about maintaining order and whether or not your relationship disrupts the standards for military performance optimization.

If you are found in violation of Article 134 of MCM, there could be serious consequences. Maximum punishments include dismissal from service, giving up pay and allowances, and incarceration for 2 years.

Even if you’re the same rank and not violating DoD regulations, romantic relationships with fellow Service Members can be tricky. Working with someone you’re romantically involved with can distract you from your duties. You could end up spending less time developing your relationships with other teammates as you focus on your love life, which can hurt team unity. Your relationship also can negatively affect the morale of those around you, especially those who are likely separated from their loved ones during deployment. And there’s always a risk that your relationship might end on bad terms, which could impact your ability to effectively work together afterwards.

Another consideration is the effect of having a sexual relationship with someone in your unit or even at your installation while in theater. While consensual sex in theater isn’t prohibited, it can lead to potentially negative effects on readiness or morale. Extramarital sexual conduct and sexual misconduct are all potentially serious offenses outlined in Article 134 of MCM as well. In some cases, these types of relationships among unit members have the potential to “sexualize” the work environment, making it difficult to stay mission-focused.

It’s also important to consider the effect of pregnancy on readiness. The rate of unintended pregnancy among active-duty women is almost 50% greater than their civilian counterparts. And once a woman becomes pregnant, she must be evacuated from theater immediately and remain non-deployed for the rest of her pregnancy plus a minimum of 6 months after pregnancy ends. A teammate’s absence can affect unit readiness and morale. The duties of the absent teammate are distributed among the team, because a replacement teammate is often not assigned, which can cause resentment or feelings of unfairness.

A close bond with your unit members can build cohesion, make your team stronger, and optimize your performance. It’s natural that people working together closely might develop personal or even romantic connections. But if a connection (or its consequence) starts to affect order and readiness, you might need to reevaluate the relationship.

For other resources about sex and intimacy, read these HPRC articles: 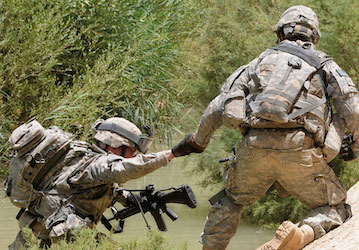 Building team cohesion in military unitsWhen you understand cohesion, you can build stronger relationships with the members of…Article